One of Refinery29’s and POPSUGAR’s Favorite New Books of December 2019!

A supernatural thriller in the vein of A Head Full of Ghosts about two young girls, a scary story that becomes far too real, and the tragic–and terrifying–consequences that follow one of them into adulthood.

In 1991, Heather Cole and her friends were members of the Dead Girls Club. Obsessed with the macabre, the girls exchanged stories about serial killers and imaginary monsters, like the Red Lady, the spirit of a vengeful witch killed centuries before. Heather knew the stories were just that, until her best friend Becca began insisting the Red Lady was real–and she could prove it.

That belief got Becca killed.

It’s been nearly thirty years, but Heather has never told anyone what really happened that night–that Becca was right and the Red Lady was real. She’s done her best to put that fateful summer, Becca, and the Red Lady, behind her. Until a familiar necklace arrives in the mail, a necklace Heather hasn’t seen since the night Becca died.

The night Heather killed her.

Now, someone else knows what she did…and they’re determined to make Heather pay.

I really enjoyed this supernatural novel. It was told through Heather’s first person point-of-view.  She was a child psychologist to make up for what happened when she was a kid. I definitely liked the “then” chapters better than the “now;” however, the ending really started to pick up, leaving me engrossed in the story.

My favorite lines: 1) Guess I’ve always been better at keeping secrets. Even from myself. 2) You can’t unopen an envelope. Can’t undo the damage you’ve done. 3) This is a private apocalypse. 4) I refuse to believe the dead can buy postage stamps. 5) An apology lingers on my tongue but it’s bitter and sharp and I keep it to myself.

The beginning was very slow and drawn out, for me as a reader. I started to enjoy the story better when it introduced the “then” sections. As little girls, Heather, Becca, Rachel, and Gia took part in the dead girls club. They talked about serial killers, dark topics, and the Red Lady. I loved the twists at the end. I hadn’t seen any of that coming!

I was hooked the second Heather announced she had killed Becca, and no one had ever found the body. I’m a sucker for a good mystery, so I was excited to see who was behind taunting Heather. The ending did not disappoint.

I’m a worry wart, probably been like this all my life. Since I’ve gotten older, I can reel my fears in, or at least I try to…Want to know my top 3 fears? Check out K.T. Rose’s blog to see my guest post–MY TOP 3 FEARS by Yawatta Hosby.

***I received a free copy in exchange for an honest review***

There’s something about Meredith…

Meredith is a young underachiever, living in a squalid apartment, struggling to stay one step ahead of her landlord and the law when she meets a man from her past who offers her a way out and a chance to start over.

Having worked her way into the lives of the rich and privileged, Meredith will do just about anything to preserve her new lifestyle.

But just how far is she prepared to go?

Phil Kurthausen is also the author of the unmissable psychological thriller, Don’t Let Me In. How To Kill Your Friends is a fast-moving psychological thriller which will keep you on the edge of your seat. It’s the perfect read for fans of authors like Rachel Abbott, Kerry Wilkinson and Mark Edwards 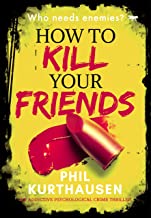 I really enjoyed this suspense book even though I thought it’d be more dark, with more suspense, because of the title. The opening sentence: “Meredith couldn’t be sure, but she felt like she was being watched.” had me on the edge of my seat. Who was watching her? The story was written in Meredith’s third person point-of-view. However, the old friends she reconnects with knew her as Nancy. I loved the backstory regarding what happened to her dad.

My favorite lines: 1) Meredith nodded and looked again at the image. It made her stomach twist with excitement and fear. 2) Olivia would be furious and this made Meredith smile.

There was a cute scene when Meredith met Edu at a bar for the first time. I liked that the characters were somewhat unlikable, especially Olivia. It made them seem more relatable. There definitely weren’t any Mary Sues in this book. Amy was a famous fashion vlogger who was quite flaky at times. I probably liked her the most. It seemed like she was more accepting of things than the others in the group.

For the title, I was expecting a bloodbath, but that definitely wasn’t the case. I will say though, the story really picked up for me towards the end. Meredith was in a few nasty predicaments (can’t spoil it for you). And, I loved the ending. I wasn’t expecting that outcome. It was a nice twist.