Every murder has a story.

Every story begins at home.

Tampa newscaster Tori Younger is saddened to learn her childhood friend, Brooke Martin, hung herself from the old water tower in their hometown. Tori hasn’t spoken to Brooke in years and doesn’t feel comfortable returning to attend the services. Then cryptic text messages from Brooke’s cellphone change her mind.

Attending the funeral, Tori confronts a past that still haunts her and questions the text messages haunting her now. Her investigation leads to a fact she suspected all along: her old friend didn’t commit suicide but was murdered. There’s no shortage of suspects either: Brooke’s angry husband who instigated a fight the night she died; Brooke’s high school principal who denies rumors they were having an affair; and a town sheriff who shares a stormy past with Tori and is blocking her investigation at every turn. The only witness appears to be Brooke’s five-year-old daughter who hasn’t spoken since the tragedy and continually draws the same graphic picture of the night her mother’s body was discovered hanging from that old water tower.

Tori knows one of them has Brooke’s cellphone and is texting her from it. Others are convinced it’s Brooke reaching out from the Great Beyond. Either way, someone from her past is playing a deadly game of Hangman. 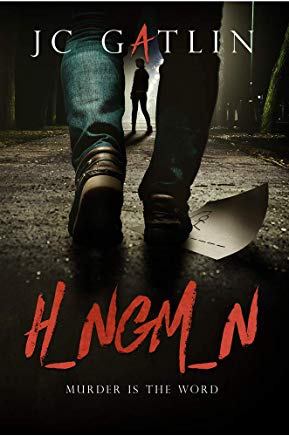 I loved this murder mystery. The opening scene was very chilling. Brooke is arguing with her drunk husband, yet she’s scared that someone or something’s outside, staring at her through the kitchen window. The author did a great job of providing red herrings. I was shocked by Brooke’s killer!

My favorite lines: 1) The barking stopped. The room turned silent. Dark. 2) “Fate is fate. You can’t escape it.”

I loved the rhythm of how the author’s sentences flowed. I really liked Tori and her cameraman’s friendship. They made a cute duo as they tried to figure out the clues to who was sending Tori cryptic text messages from Brooke’s cell phone. I was confused though why hardly anyone questioned why the young daughter Darla was drawing two silhouettes looking up at her dead mom, instead of just one.

I would have given the book 5 stars, but I deducted a star for formatting issues. Weird indentations between words every other paragraph in my ebook.