She’s an overachieving law student who’s not looking for love, so why can’t she resist the mysterious newcomer?

Outspoken and abrasive, law student Isabel enjoys arguing with just about everyone, including her friends. Her strained relationship with her mother, less-than-stellar job prospects and frustrations with the conformist culture of Washington, DC have left her resentful and unfulfilled. When she meets Tarek, a new fellow student who dares to challenge her, she is intrigued but skeptical. While Isabel  is risk-averse where her feelings are concerned, she is also becoming increasingly curious. She’s afraid to get close, because being vulnerable always lead to being hurt, doesn’t it? 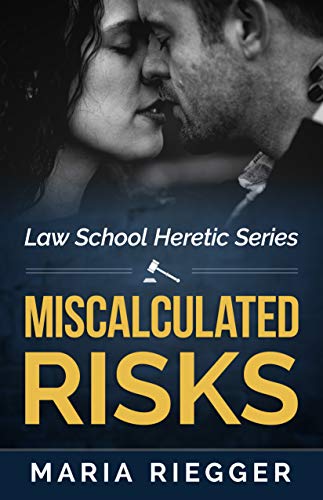 I really enjoyed this contemporary romance. I liked that it was written in Isabel’s first person point-of-view. It seemed like she was personally talking to the readers. Being an INTJ, I could relate to some of her mannerisms, especially being misunderstood.

I was really intrigued of how her dad had passed away and why she thought she was responsible. I was hoping to get some answers but didn’t. Hopefully, the mystery is solved in book #2.

I found Tarek quite dreamy. He was patient and understanding, yet he called Isabel out when she was being messy. I shipped them hard. My favorite scenes were when they studied at her apartment for the first time and the dance club scene. When they got tea and talked afterwards was a really cute scene.

By the title of the series, Law School Heretic, I knew I was getting into some law terminology as a reader. Reading books help escape from the negativity of the world sometimes, so I was surprised by all the political conversations. Isabel and Tarek were both conservative, and I didn’t agree with any of their political beliefs. I wish their friends would’ve spoken up more in debates instead of just rolling over. Isabel always called everyone judgmental, but she was the most judgmental out of everyone.

I felt bad for how her mother always pressured her into finding a man. The author did a great job showing the tension when she interacted with her family. I liked seeing Isabel at work too. I wished the boss would have supported her more, but Isabel was a tough cookie who could protect herself. A trait I admired about her.

I loved all the classroom scenes. It was fun seeing her friends pick on Isabel to get her out of her shell. I thought the term ‘smile’ was overused, but it didn’t distract my reading. I appreciated the diversity of characters from the Latin and Middle Eastern community.