The Locke twins possess a peculiar power: they can pass pain and injuries to one another. Despite this flaw, Aries Locke dreams of becoming a superhero one day, to the chagrin of his twin, Ezra. But after performing a heroic deed they soon learn why there are no heroes in the world.

With the help of their mother, they run away from the shadow of The Purity Project–an organization devoted in controlling and regulating superhumans. 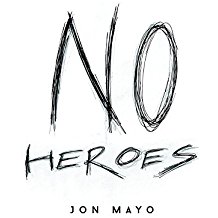 I loved this book that was divided into three parts. Part One showed Aries and Ezra living with their mom, Gracie. She turned out to be more than a pill-popping, sad person. She had been hiding a secret forever. Part Two showed the twins as teens, growing up with their foster sister, Caylee. She had a secret of her own. Part Three focused on Barry and Theo of The Purity Project–the villains.

My favorite lines: 1) It looked painful, but he knew that all origin stories began with trauma. Aries just got his. 2) “Suffering is part of life. It is what makes us strong.” 3) It was a murder scene without a corpse. 4) There was a chill that crawled up Aries’ back. 5) One bullet shattered his breastbone. Another popped his right eye open like a squeezed tomato.

I loved Aries and Ezra, and I was really rooting for them throughout the book. It was a wicked scene when Ezra fell from the tree but Aries’s arm got broken instead. I also really enjoyed when Aries saved a cat from a fire. After that, it was nothing but drama. The author did a wonderful job of showing how crappy their life was, always on the run with their mom. I was sad about what happened to Gracie.

I thought it was a cute moment when the twins met Caylee for the first time. I’ll admit in Part two I was asking myself: is this book a super hero origins story or a romance? But, the devastating scene Ezra and his loved one faced broke my heart. This section of the book made sense at the end. Readers needed to feel Ezra’s pain to understand why Aries was gung ho on becoming superheroes.

I really enjoyed the ending, but Part One was definitely my favorite section of the book. It was cool that the book ended on a cliffhanger.