me setting up my table

Over the weekend (9/14 and 9/15), I participated in the Craft Train 2 fair. There were 104 vendors, including 15 local authors. I had a blast both days. The more book signings I do, the less shy I become at talking to strangers. I sold 13 books, gave out a lot of business cards, and made over $120 dollars. Not bad for hanging out at the Martinsburg Roundhouse. 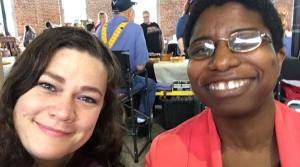 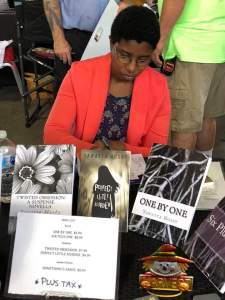 I’m in the process of switching my paperback covers into my more interesting ebook covers, so hopefully, that will help all of my books stand out in the future. I honestly think Perfect Little Murder was the best seller both days because the cover was eye-catchy, compared to the other generic covers.

The highlight of the second day–we had only 5 minutes left before the craft show was over. Some vendors were already closing. The guy beside me was having his family help him pack his stuff and fold his tables. A little girl named Kaylen walked over to my table. She was smiling, which is totally contagious. I asked her if she liked to read, and she said yes. She took me by surprise when she mentioned liking horror and suspense. Her mom let her buy Perfect Little Murder after I said the main character was around the same age as Kaylen.

You just never know what may happen 🙂 For example, I found out a YouTuber posted a video of me at the book signing! Click on the link to check it out: Book Signing.

An area where I live in West Virginia, they took away our mall a few years ago. They keep bringing hotels and restaurants in our area but NO places to shop. It’s beyond annoying. The only clothing stores are Gabes, Target, and TJ Maxx. The only place I like is Target. Wanting more choices, I’ve had to resort to buying clothes online.

This weekend, I have a book signing at a local craft show. I’m looking forward to meeting other authors and hopefully networking and selling some paperbacks! I wanted a new outfit for the occasion, so I tried Stitch Fix (after seeing a promoted post from the company on Facebook).

I was very satisfied with my first box, and I ended up keeping every item. Stitch Fix always send five items. If you keep everything, then you get a 25% discount plus $20 styling fee taken off when you checkout. 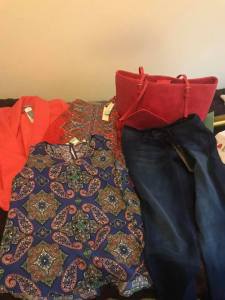 I really liked my second box from Stitch Fix as well and kept everything. I let my stylist know from the beginning that I love bold colors and funky prints. She hasn’t disappointed me yet. 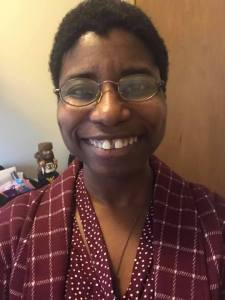 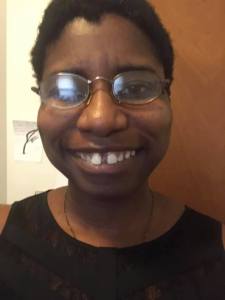 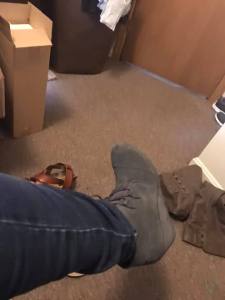 I may also have a book signing in October (depends on if I have any extra books from this event), so hopefully, my third Stitch Fix box will have some gems. If you want to help me get $25 referral credit and you receive $25 credit, then please try Stitch Fix. There’s no obligation to keep anything. It’s free shipping, getting the items and returning items. If I’m not mistaken, it’s only available to the US. Boxes can be for women, men, or kids.

Have you followed your dreams? 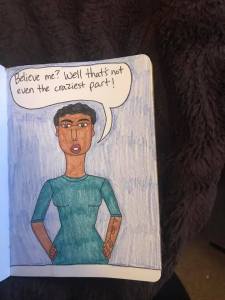 Around March of this year, I decided to stop being shy and share my artwork, joining the Brooklyn Art Library’s Sketchbook Project volume 14. So that I wouldn’t chicken out, I decided not to put pressure on myself. I wanted it to appear like I was just drawing for myself, instead of trying to appear professional. I finished my sketchbook in under 5 days!

Something spooky happened to me as a kid. I’m sharing my story. Want to know the craziest part? Click on the link to see my sketchbook: My Childhood Secret.

Since I love drawing myself as a cartoon, the final pages are of my photo feed on Facebook 🙂 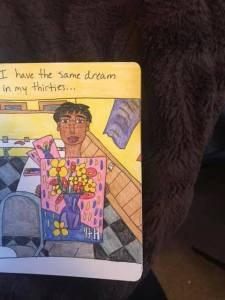 Joining the Sketchbook Project family was a fun experience, and I’m sure I’ll participate in more volumes. For all the artists out there, do you share your work?

Trigger warning: caution is advised, the book contains graphic content. Do not read this if you are at all weak-stomached or easily sickened / offended. Reader discretion is advised.

After Jason is committed to a mental institution, he begins to uncover things he never knew before or things his mind shut out to protect him. He finds himself questioning what’s real and what’s not. What happened to his wife, Lisa? Where is Lea? Why can’t he remember what happened?

Meanwhile, Jerry is dangerous and unpredictable. He envisions a world where boundaries are broken down and he is free to enforce his narcissistic belief that he has a divine mission.

An explosive ending that is anything but expected, forgive yourself for shuddering throughout and after you close the book.

Drawing inspiration from real cases, and with well-researched, realistic characters, this thriller is not for the soft-hearted.

I liked this suspense novel. It was very dark and had topics on incest,   stalking, pedophiles. I thought the author did a great job showing how gross Jason and Jerry were. They made me cringe throughout the whole story (in a good way).

I thought the beginning where Jason is talking to a therapist to regain his memory was a little boring. It was repetitive with him not remembering he murdered his wife and had a sexual relationship with his daughter. But, when Jerry’s crazy ass came into the story, things got very interesting.

As a reader, I don’t mind dark books. Sometimes, the darker the better, and I usually look at the villains as just misunderstood. The author has a trigger warning in his book description, but I think if you like horror, suspense, or thrillers, then you’ll be fine reading this.

The book was written in Jason and Jerry’s point-of-views so you get inside their head. I wished some parts slowed down instead of being glossed over. For example, I was interested in Jerry stalking his tenants and conning a drug addict mother. One scene, I wished it would have played out with showing how distraught the mom was of her daughter running away, instead of it just being told to the readers through narrative summary.

Spoiler alert! Don’t read any further if you don’t like being spoiled: The ending was getting juicy. Jason met someone sketchy who may have actually killed his family and framed him. Jason’s son may be alive. Jason was starting to get his memory back and starting to figure out clues. Then, the story ended so abruptly. You will not get any answers in this book.